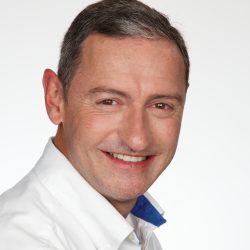 Robert qualified at Kings College, London in 1987. After working in an orthodontic practice in Colchester for four years he moved to Newbury, Berkshire.

Rob then spent the next 14 years working in a busy private practice where he built a reputation for treating complex cases involving cosmetic, implant and orthodontic treatments. At this time, Rob also became involved in teaching and mentoring and has taught many dentists on all aspects of cosmetic and dental implant therapies.

In 2006, Rob moved to Pentangle Dental Transformations – a purpose built centre for dentists to send their patients for implant and complex treatments. Rob now spends his time between treating these referred patients and teaching.

Rob is currently a post graduate tutor for the Thames valley deanery, a mentor and faculty educator for the ADI (Association of Dental Implantology), a mentor and international speaker for the ITI (International team of Implantologists), a Royal College of Surgeons examiner for the implant diploma (RCS Edin) and the Membership in Advanced General Dental Surgery (MAGDS RCS Edin) and is the current president of BAAD (British Academy of Aesthetic Dentistry).

He presents regularly at scientific meetings and has published several articles on implant therapy.

Literally speaking, biomimetics simply means mimicking nature. Dr Fran Brelsford is one of our guest speakers at our Female Leaders in Dentistry day on 5th March 2022.

Message us for more information or visit our website http://bacd.com
#BACD #Biomimetics

People are still talking about #BACD2021 it certainly was a conference to remember!
#YoungDentist